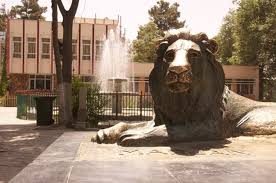 As the news circulated yesterday of yet another Taliban bomb attack in Afghanistan that claimed the lives of 64 people and injuring more than 300, was reminded of a story I recently came across in a book called The Taliban Shuffle. (now a major motion picture starring Tina Fey) It was about the Kabul Zoo and its most famous resident Marjan the lion.  Marjan which means coral or precious stone in Persian, was given to the Kabul Zoo by the Germans along with a lioness called Chucha in 1978 . He was donated in order to quite rumors of a Soviet invasion. Of course within a year the Soviets invaded Afghanistan anyway and like all the other sites in Kabul the zoo also suffered the consequences.

Kabul, Afghanistans capital City was captured in 1992 by Jihadi groups and the Government lost control. As soon as the Russians left Afghanistan warlords moved in and a terrible civil war broke out. They began shelling and sending rockets into Kabul, as a result the walls of the zoo came tumbling down. The medical unit was destroyed making it impossible to treat any of the animals. Disease and hunger spread like wild-fire. Although many of the animals were eaten or died the fledgling zoo somehow remained open. END_OF_DOCUMENT_TOKEN_TO_BE_REPLACED

in a love/hate relationship with words

A publication of Parnassus Books

'Reading one book is like eating one crisp.' -Diane Duane

Disability Now. Our voice, our lives.

the blog of a bookish, nut-allergic girl

A SILVER VOICE FROM IRELAND

An Eclectic mix of items from a 'senior' blogger in Ireland looking at the past and keeping an eye on the present.

HowNowJosephine: Attempting To Right The World's Wrongs One Margarita At A Time...

Inspiring positive change via my writing, photography and travel from around the globe.

Practical solutions and established strategies to improve your blog. Suggestions that will make a difference.

Making the most of it

Everything you can imagine is real. - Pablo Picasso

Godspeed To A Mighty Balloon